The Guardian Citadel is the base of operations of the Guardians. It is a massive facility built into the side of a mountain in a valley in Arizona. The outer walls are made from obsidian and arch over the field in front of them like frozen waves. Watchtowers on their tops are patrolled by Guardians with energy weapons. Red flags mark the point beyond which Guardians stop warning and start shooting. Inside, most walls are carved from native rock, while the outer fortifications are antique and reinforced with layered stone. 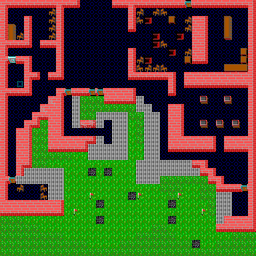 For the first time you get a look at the massive bronze doors shut against your attack. The word is formidable.  You realize this cul-de-sac is a killing zone tailor made to protect the defenders and destroy the attackers.

The outer wall is protected by three parapets - the west parapet holds Sisters Theodosia, Lucretia, and Ursula. The center parapet holds Sisters Jade and Isolde; the east parapet holds Brothers Anthony, Boris, and Nathan. It's worth noting that these three groups are locked into their parapets by locked doors. In the hallway between the main hall and museum area, Brother David can be found - any of these groups can be deadly to characters in medium armor, and some or all may take pot-shots at you from the walls as you approach. Thus, you may want to consider your entry strategy carefully.

The Citadel doors are massive and wholly made of bronze. Each stands 25 feet high and is inscribed with Guardian sayings.

There are two ways into the Guardian Citadel - brute force and excessive brute force. Regular ordinary brute force (without fighting Goliath) requires a minimum of two blocks of TNT or higher powered explosive. If you walk into the walls on the center parapet (where Sister Jade and Sister Isolde are) or between Brother Goliath and the eastern parapet, you will find some spots that say they are weaker than other parts of the wall. Use the TNT to blast your way through and you're in! If you want to pick a serious fight, however, blowing the main gate off its hinges will get you there. Great force (such as Plastic explosives, RPG-7's or LAW rockets) can bring them down. Beyond the doors, the great hallway, whose vaulted ceiling is lost in darkness, stands carved from native rock, inscribed with sayings in gold leaf.

From inside the west office you hear a voice call out, "I thought I told you I would see no one today, Sister Wrath."

To the west is the Guardian Armory, stocked with AK-97's and 7.62mm clips in one pile, and a Meson cannon, Power packs, and possibly other items on an energy weapons rack rigged to explode (second loot pile). It is guarded by Donny & Marie as well as George & Gracie. Further in past the armory is the offices of Brother Austin and his secretary, Sister Wrath. Be careful - when you first enter Brother Austin's office, you'll be attacked with a grenade before the fight even begins! Even so, the fight is well worth it: he carries the formidable Ion beamer.

A huge chef leaps out and attacks, screaming, "My souffle, you have ruined it!"

The Guardian Mess Hall is located in the vicinity of the Museum, with Sisters June. April, and May in one group, and Brothers George, Weez and Joseph in another group. The Mess hall's wall separating it from the kitchen is painted with commercial slogans from before the war. Inside the soot-blackened kitchen the Guardian's massive chef Brother James, will attack you with two knives for ruining the dinner he worked so hard to prepare.

This part of the Citadel also houses the Guardian's museum, with five locked showcases holding several items from before the war, including a Grazer bat fetish. The walls are decorated with the glorious Premacorin mural "The Cycle of Man". You'll also have to deal with Brother Kenneth sniping at you from the shadows, and Brother Akira sniping from the hall if you haven't dealt with him along with the trio in the east parapet. 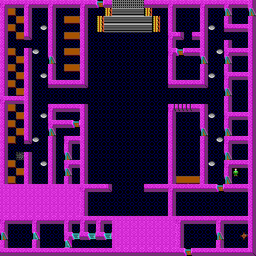 Beyond the entrance and the frontal part of the hallway lies the Outer Sanctum, carved from polished obsidian, purple in hue with pre-Holocaust items decorating its walls. The Grand Hallway is flanked by two corridors with massive sandstone pillars, where most Guardian facilities are located. The left corridor leads to the sleeping quarters of the Guardians, lined with beds. All have white sheets and either blue or red woolen blankets. The southern chamber's door was blown off and a trap with tungsten spikes laid in the place of the bed nearest to the door (reasons unknown). Opposite the southern chamber are the closets where basic equipment of the Guardians is kept. The northern chamber is similar to the southern, except for the trap, and opposite it is the Guardian library, overseen by Monk Johan. The library is stocked with books predating the bomb, including, but not limited to fiction and Demolitions, Alarm disarm, Bomb disarm, Electronics, Toaster repair, Clone tech, Energy weapon and Cyborg tech manuals. Most of the books are organized by subjects and some crumble to the touch.

The corridor to the right houses the meditation rooms (where some Guardians even play poker), Cardinal Scott's office with Sister Faith as secretary and a small Guardian chapel painted with grotesque portraits and a chapel altar with a bronze triptych on the front that depicts the rise, fall and resurrection of Man. The center plate covers a small vault that is designed to store relics. The chapel also has narrow shooting ports carved into its walls that allow Guardians to cover the grand hallway with weapon fire should any non-Guardian trespass. From this corridor the jail can be entered, where the Guardians keep their prisoners (Redhawk for instance).

The Grand hallway itself ends with gray marble stairs that lead from the Outer Sanctum to the Inner Sanctum above, flanked by bronze railing worked with a serpentine pattern. The Inner Sanctum can be sealed with a massive steel portcullis that is operated manually with a crank from behind the stairs (use Strength on the crank). 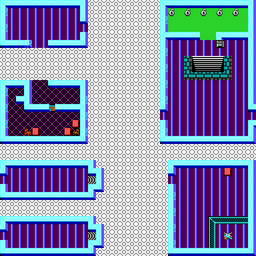 The Inner Sanctum was carved out of the gray, volcanic rock of the mountain. It is quite small, compared to the outer sanctum, and holds most of the Guardian's most cherished items. The central hall of the inner sanctum, where the marble stairs end, surrounded by the bronze railing, contains the Guardian's central vault. The vault is protected by a pair of gold doors that are very solid and traced with patterns of electronic circuitry. The doors are operated via an alphanumeric keyboard (keyword: ROSEBUD). The interior of the wall is finished smoothly and with much devotion, as it contains the most powerful and important element of the Guardian arsenal - the Power armor.

Two hallways lead from the main hall of the Inner Sanctum. The western leads to a smaller chamber and the treasury of the Guardians, protected by a squad of them led by Cardinal Chano (second-in-command of the Guardians). The treasury is protected by a massive reinforced wooden door. Beyond it, the polished, smooth walls are decorated with many fine works of art that can be recognized from books about the past. The tables inside are littered with all sorts of antiques and pieces of junk clutter this table, including an old sled with the word "ROSEBUD" on it and the Secpass B, an access card with the highest clearance, commonly used in US military bases of the late 20th/early 21st century. The treasury also has a closet which contains the Guardian robes.

The other hallway leads to a chamber roughly carved from the gray volcanic rock that houses the second most important relic of the Guardians - an AH-6503 Attack Helicopter. The chamber is very high, ending with massive doors on steel hinges that open to allow exit to the helicopter. The helipad itself is shielded by a steel wire fence, extending all the way to the ceiling. Also in the vicinity is a small repair bench perfect for reparing Broken toaster.

A first-time party is well warned that the Guardians are very tough and wear heavy armor. Most Guardians boast a minimum AC of 7 to 9 (upgraded Kevlar or degraded Pseudo-Chitin?); many boast 11 or 12 AC - Brother Austin, Brother Goliath, Brother James, Brother Jude, Brother Phillip, Cardinal Scott, Mistress Ginger, and Warden Jethro all have a 13 AC! Notably, Master Bruce and Mistress Jennifer have a 0 AC... one wonders what they were doing in that locked room?

Standing out in the open, as if he is afraid of nothing, is a giant of a man in heavy, black armor.

Brother Goliath gets his own special entry, as he should be the last person in the Citadel that you kill. He doesn't have anything important other than the Blackstar key, which you only need if you're planning to blow Base Cochise to smithereens anyway. The beauty of Goliath is that he doesn't move, he only attacks in melee range, and he has a ridiculously high AC, so you can easily beat on him forever with weapons and train up the requisite skills, at least for ranged weapons. Did I mention he doesn't move OR shoot? I love this guy...

For Energy Weapons, get Laser pistols for your team and a power pack a piece. Have them sit 20 feet away taking single shots at Brother Goliath until they run out of ammo. For Rifle skill (for the infamous Red Ryder from the Super loot bags cheat), load up M17 carbine; for Clip pistol, VP91Z 9mm pistol; for Assault rifle, M1989A1 Nato assault rifle; for SMG, Uzi SMG Mark 27; for AT weapon, Spear; for Knife throw, Throwing knife; for Demolitions, TNT.

Training up your Melee skills, on the other hand, requires a bit of patience. His damage of 6d6+13 makes him a staggering opponent to take shots from, so don't be afraid to run away if he knocks out a few of your team. He won't follow - dutiful as ever, he will stand his post as you perform Doctor checks on your teammates 20 feet away. After successfully reviving your crew to at least Unconscious, retreat to the desert and rest up, or to Highpool to see the Doctor if you don't want to wait that long in-game. Rinse and repeat!

The Guardian Citadel is full of Easter Egg pop culture references. For example, the room just outside of the Guardian Armory contains Brother Donald and Sister Marie (Donnie & Marie) , and also Brother George and Sister Grace (George & Gracie).  Brother Austin seems to have a catch phrase, but it's uncertain what this is referencing, if anything; Brother James is a huge chef who's awfully upset about his souffle being ruined (possibly James Beard?).